Suffering from Loom gloom? Check out our comparison of the six best Loom alternatives!

Loom isn’t one of the best-known screen recording and video messaging apps out there by chance.

It’s a great product that meets a need that more and more people on remote teams have been discovering - mainly since Covid-19 put most of the world in lockdown.

That is, the need to create and send quick, off-the-cuff messages to customers and co-workers. And there’s no format better for that than video.

But Loom doesn’t do everything, and finding the right Loom alternative for your business can be a tricky task.

So we’ve made it easy for you!

First of all, we’ll look at what’s good and not-so-good about Loom. And then we’ll set it off against six competitors:

Why Look At Loom Alternatives?

Let’s face it: Loom does some things brilliantly, and some that it doesn’t do well or even at all.

So we’ll set the scene with a quick assessment of Loom itself.

Loom definitely owes some of its popularity to its ease of use. With a Chrome extension and a desktop app, it’s very easy to start using Loom online or off. The UI is intuitive for recording, editing, sharing, and managing your videos.

You can record up to 25 videos of up to 5 minutes in length. There are some fun effects in the recorder. You can trim videos, you can download your videos, and there’s a good suite of sharing options.

When you install Loom, you get a 15-day Business package trial that lets you test out their premium features without spending a dime.

Some of those features are:

But at $8 per user per month, Loom is very affordable. 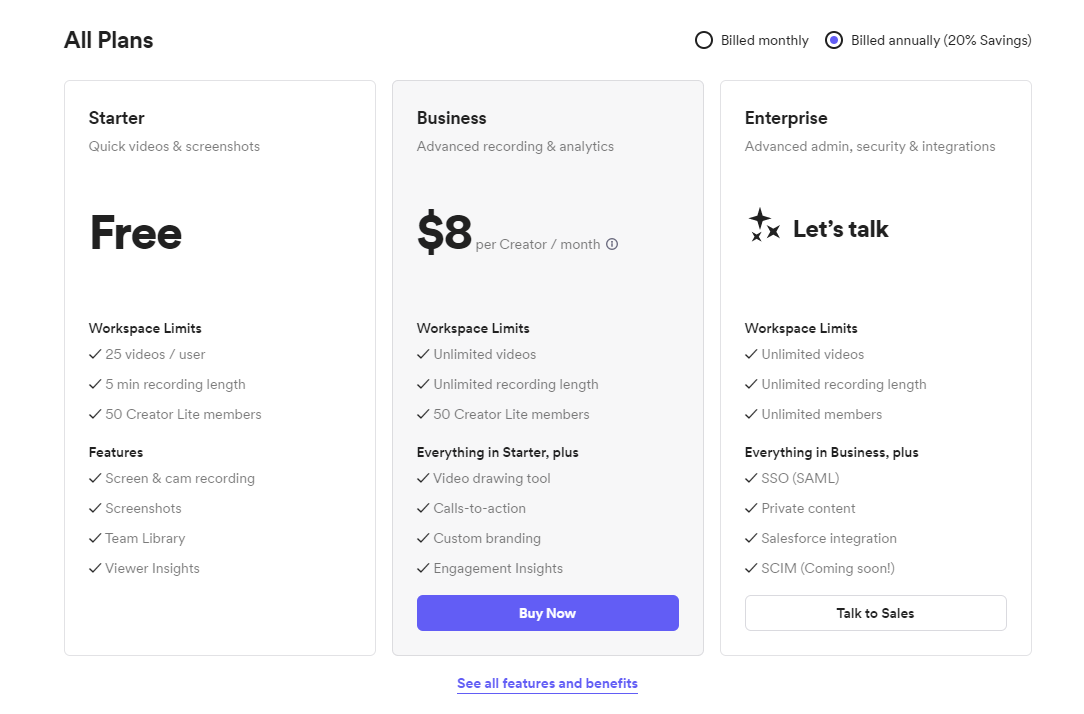 Where Loom Falls Down

As we’ll see, Loom does a small number of things really well - but there are a lot of things it just doesn’t do. Whether that’s a problem for you depends on your priority use cases.

Videos are heavily branded with Loom’s branding and calls-to-action for your viewers to sign up for Loom. This is great for Loom, but not as great when you want to send videos to your own customers!

With Loom, every video needs to be created from scratch. They do not have any functionality around templates or customizing existing videos, so it is slow if you need to create a lot of similar videos (for sales outreach, welcome videos, or other types of repetitive communication).

Which Loom alternative is the right one for you will obviously depend on how you plan to use a screen recording and video messaging platform.

One area that loads of people use Loom for is recording and sharing quick videos with prospects and customers as part of sales, marketing and customer success processes.

Personalized video messaging should be a no brainer for customer-facing teams, right?

So that’s the test we’re going to put these Loom alternatives to.

We started Sendspark because - as marketers - we wanted a way to share videos with customers that looked more branded and professional, and integrated better within existing customer communication workflows.

Loom is a screen recorder first and foremost, with messaging tacked on. Sendspark has been designed from the ground up to focus on every aspect of customer-facing video messaging.

Loom’s easy to use, but Sendspark is even easier: 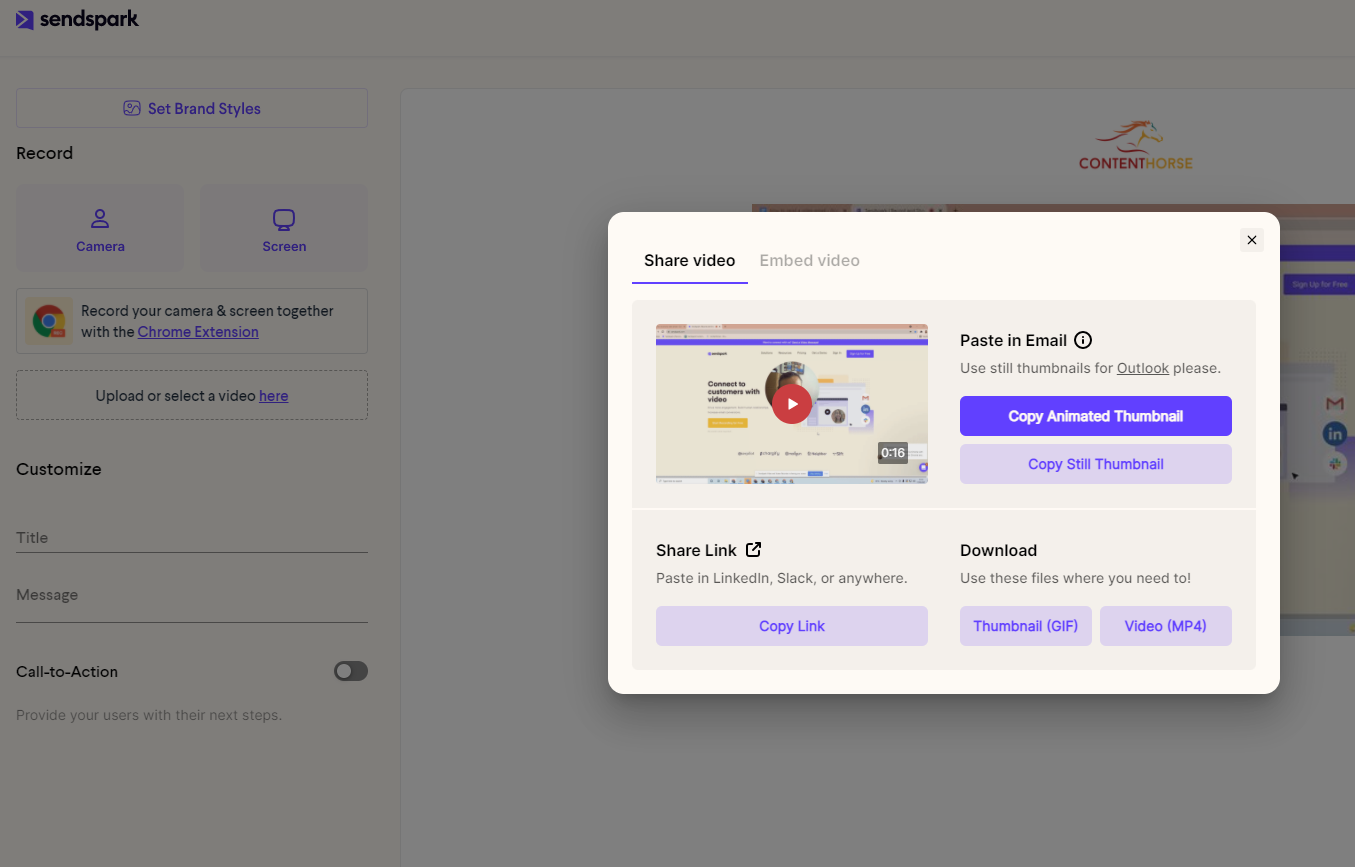 Sendspark doesn’t give you any video editing options. It’s all about the messaging.

Loom has very basic editing capabilities: you can trim recordings in the post, but that’s about it. Effects and drawing tools have to be used during recording, which gives a pretty clunky feel to live footage.

If video editing is a bit part of your workflow, maybe look at some other options.

Both tools are focused on screen-recordings and video messages, so they are not weighed down with many features not covered above:

Both tools have free and paid-for price tiers. 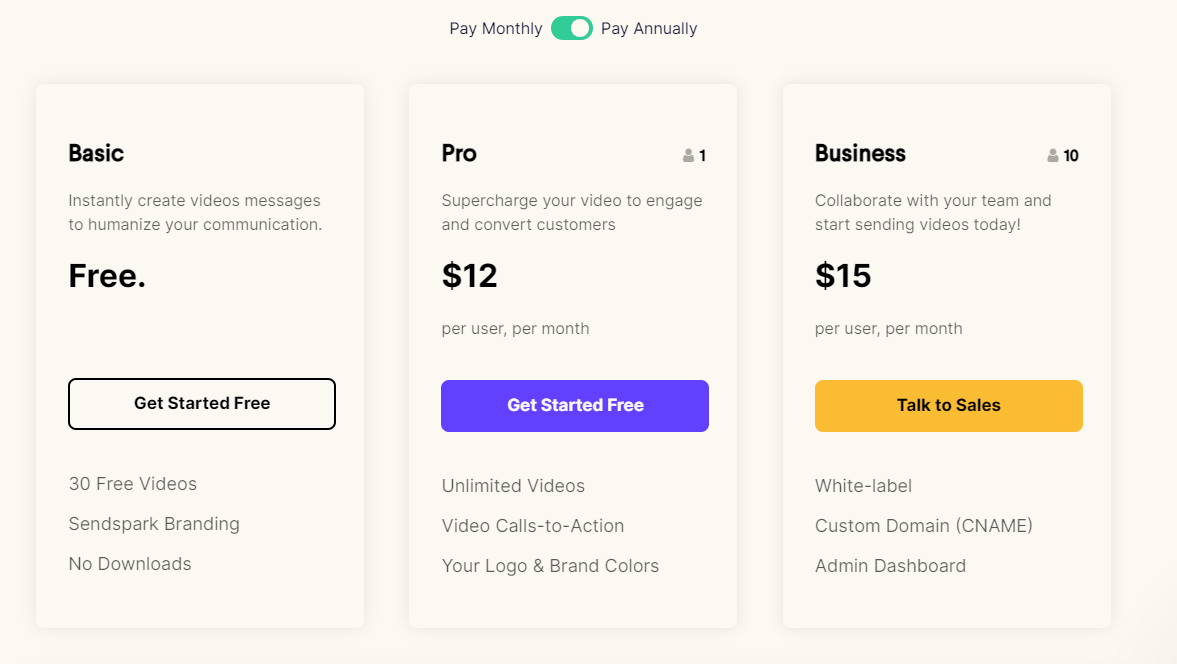 Veed is, first and foremost, video creation and editing platform. Of all the tools we’re looking at, Veed lets you create the most polished and distinctive videos. It also has messaging capabilities, which pits it as a legitimate Loom alternative.

Veed is definitely more challenging to use than Loom, but that’s because it has way more functionality. 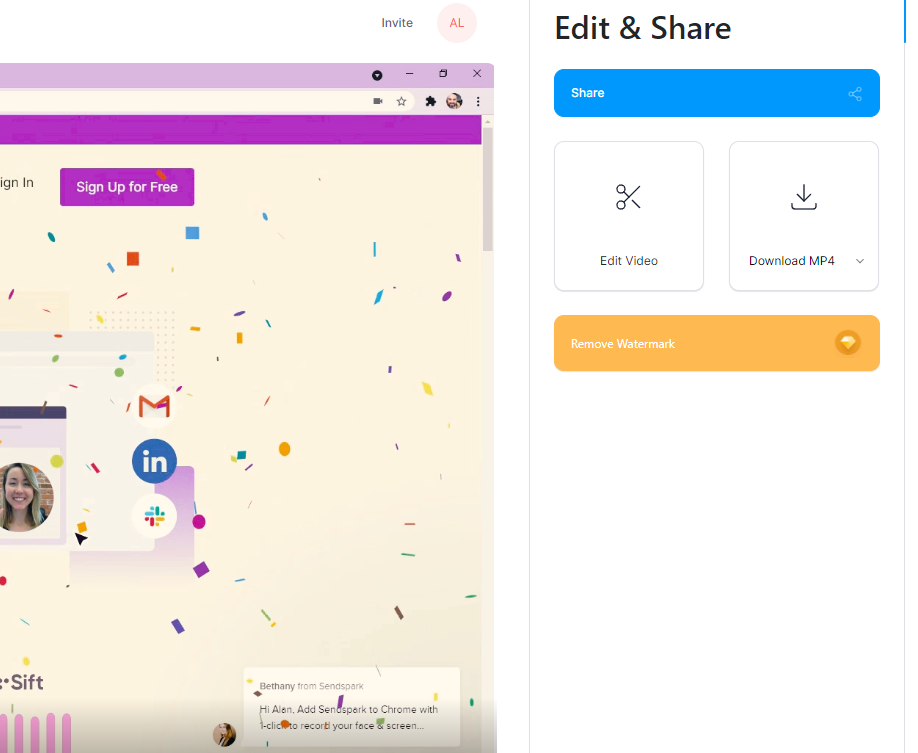 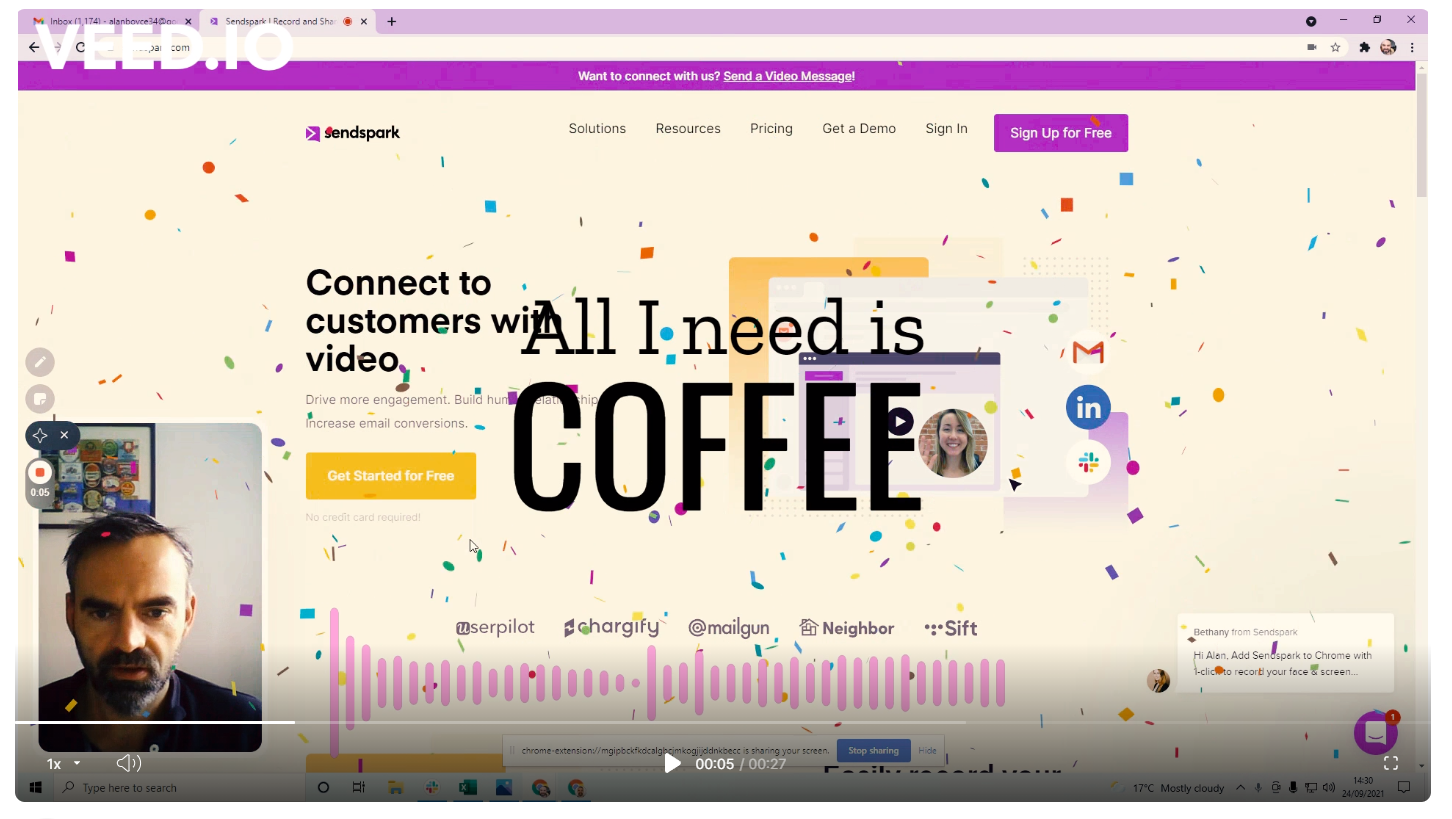 Messaging is not Veed’s strongest suit. It feels a bit like it’s tacked on top of the app’s real purpose (editing). 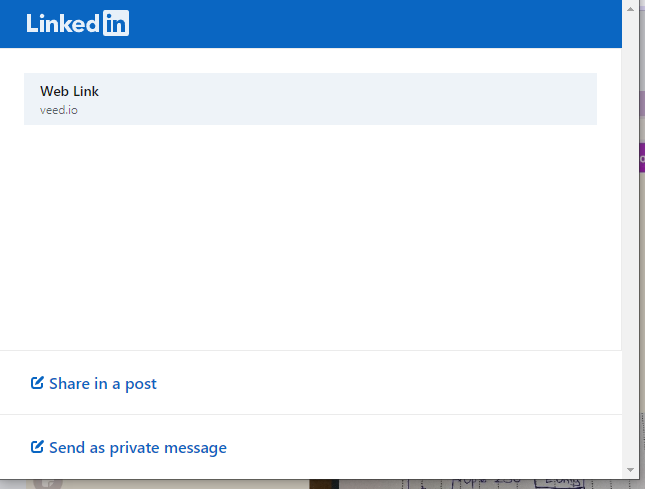 This is where Veed is outstanding - especially compared to Loom’s super-basic functionality. 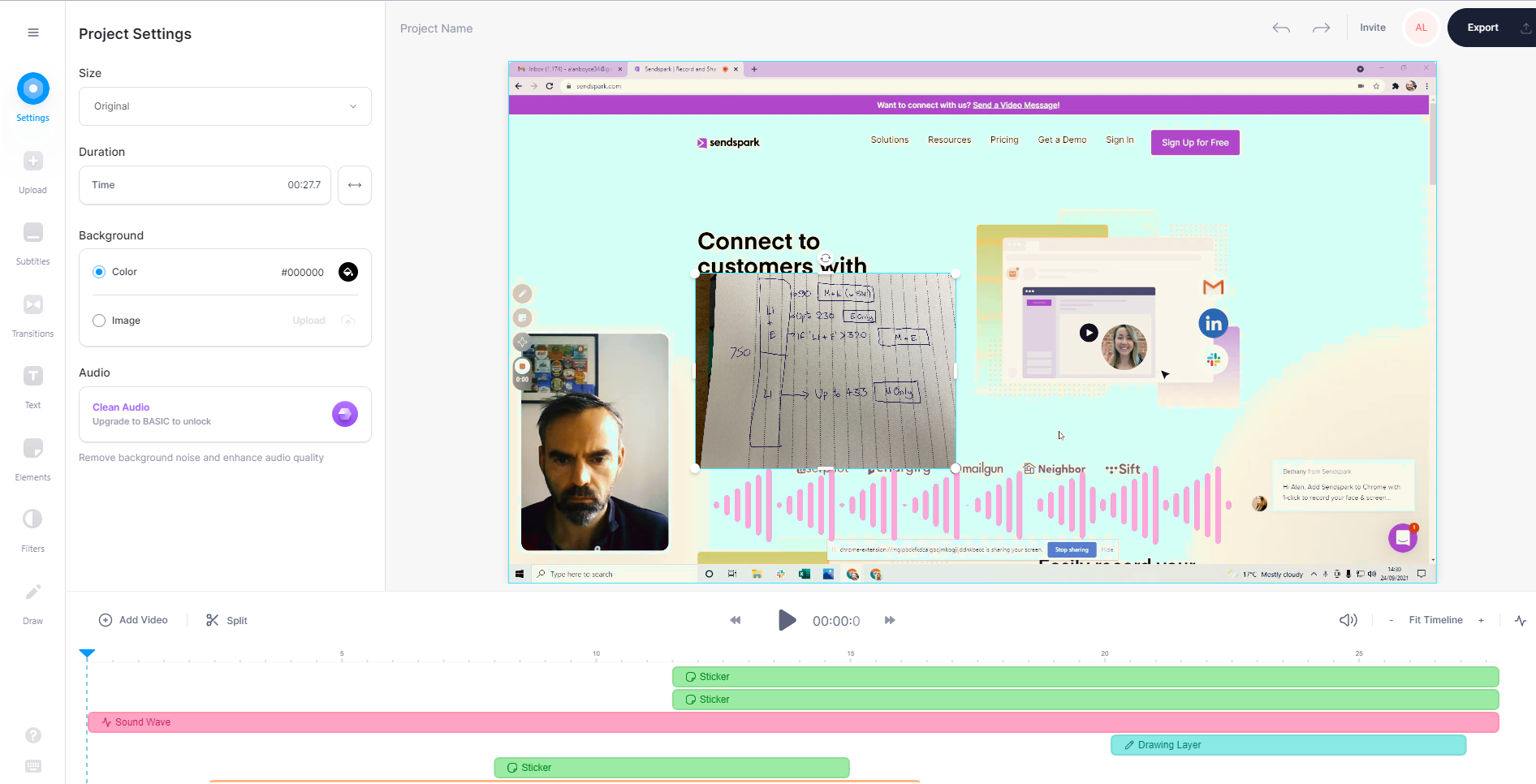 Veed’s focus on customization and quality gives it an edge here as well.

Both Loom and Veed have free packages available.

Nimbus Note is primarily a note-taking app. We’ve included it here because it does have screen recording and messaging features like Loom. But if that’s your main use case with Nimbus, maybe think again.

Loom is definitely easier to use. I found it hard to locate the “activate webcam” setting in Nimbus, which led me to think it didn’t have that functionality at all at first. 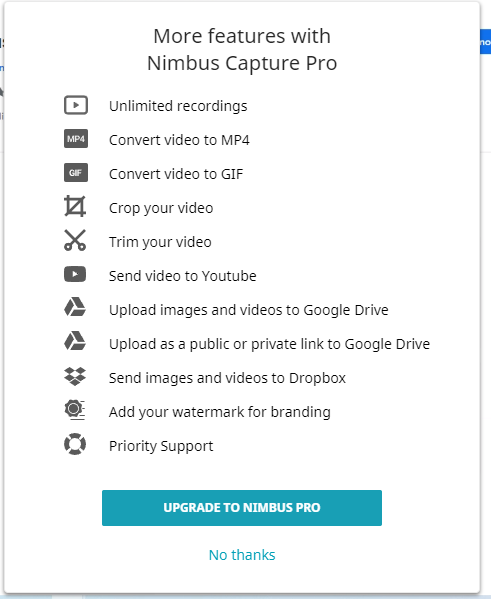 Nimbus is designed for sharing messages (“Notes”) inside an organization’s workspace.

While you can only trim your recordings in Loom, Nimbus has zero editing capabilities in its free version.

OK, this is not exactly an “apples and apples” comparison. Nimbus is doing something rather different from Loom, and maybe that’s what you need. If you already have it for other purposes and you’re only sharing videos internally, maybe it could stand in for Loom, Sendspark, or Vidyard GoVideo. 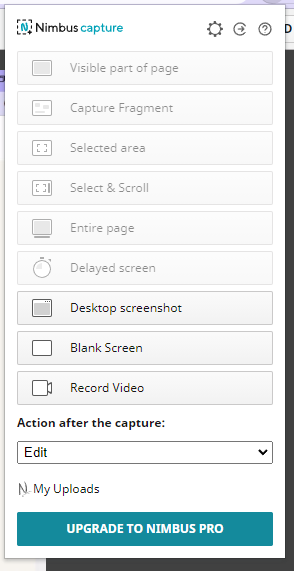 At $4 per user per month, Nimbus is cheap and offers unlimited recordings. 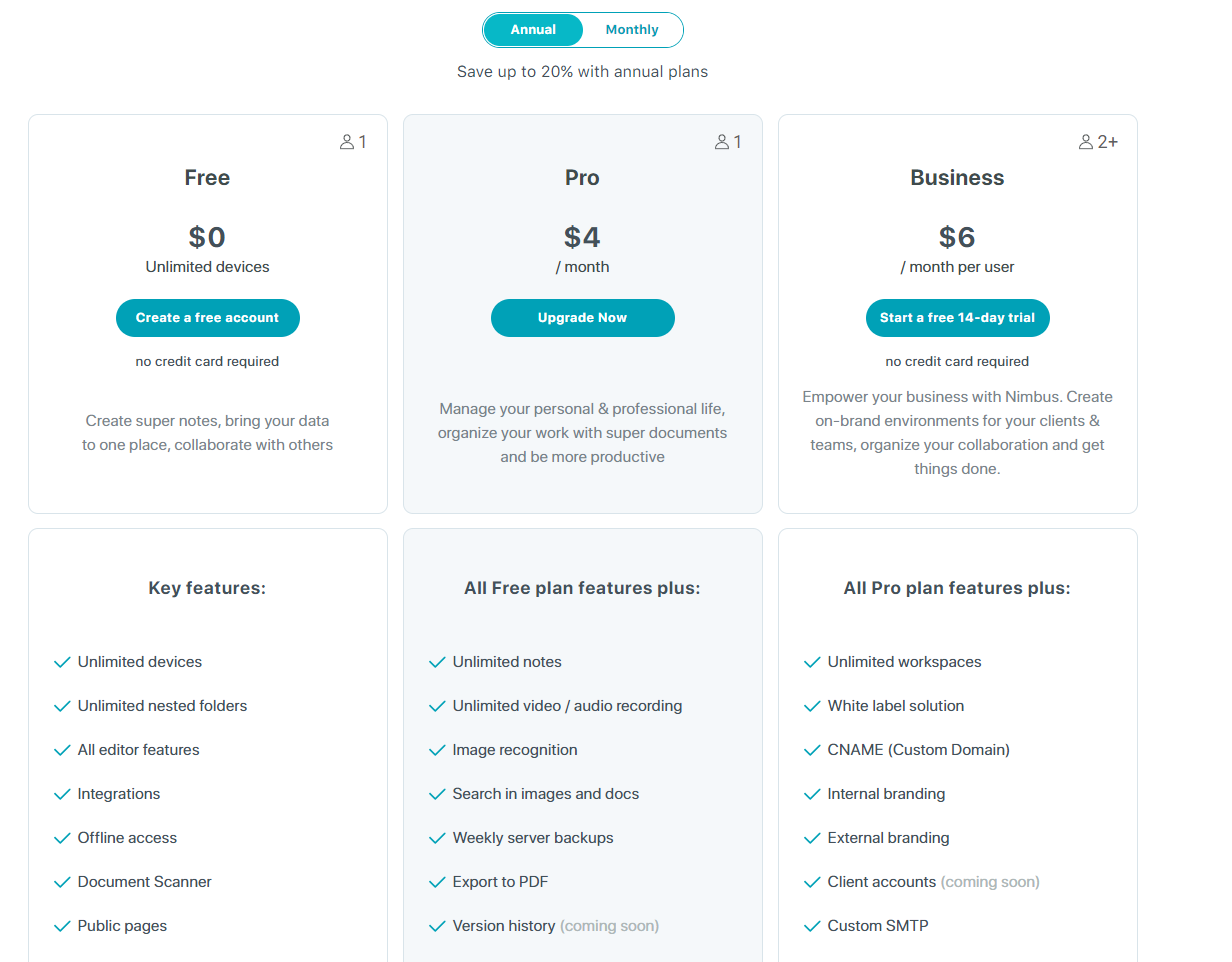 Bonjoro looks like Loom at first glance, but it’s more complicated than that. It incorporates a whole CRM-lite system, making it great for salespeople to send out messages to prospects in bulk and across multi-step campaigns.

As a complex sales funnel management tool as well as a screen recorder, Bonjoro needs a fair amount of setup before you can start using it. Their primary onboarding flow estimates 14 minutes, but it took me a lot longer.

It depends. For sustained messaging campaigns across large numbers of people, Bonjoro’s CRM features make it the best Loom alternative in this blog. For a one-off, off-the-cuff, personalized messages… not so much.

Bonjoro has a slight edge over Loom here, but it’s not in the same class as Veed.

Again, as it is doing something rather different from Loom, Bonjoro has more extra features. 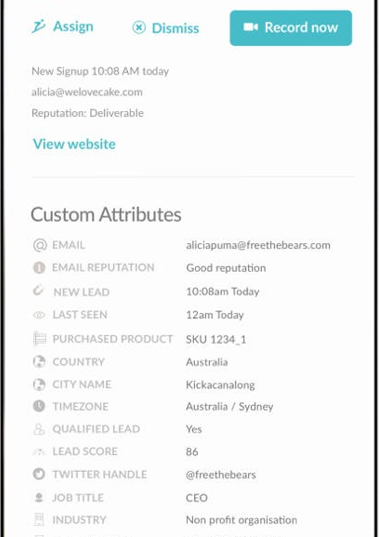 Bonjoro doesn’t have a free package - just a 15 day free trial of the Pro plan, which costs $33 per month. 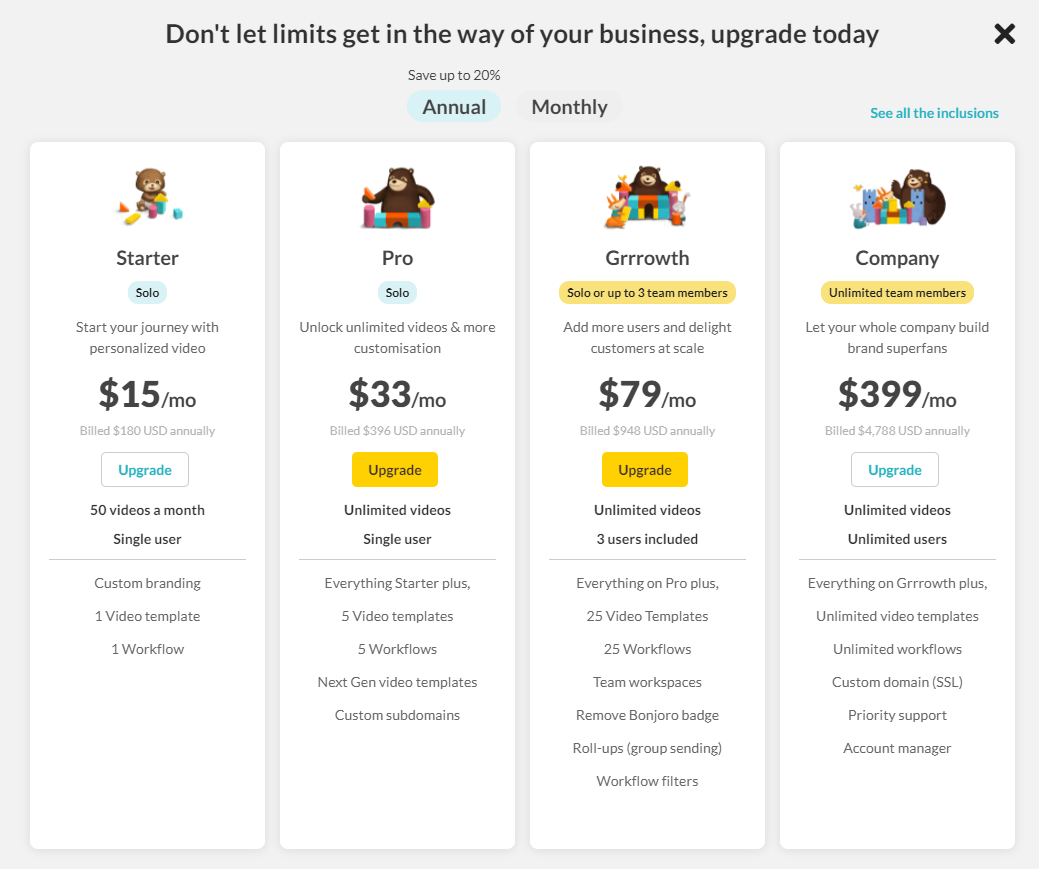 Vidyard’s free tool, GoVideo, competes directly in the same space as Loom. We put Vidyard itself head-to-head with Loom in an earlier blog, so this time we’ll just compare Loom to GoVideo.

While their UI’s are very similar, Loom just wins out with a simpler, more intuitive interface.

Really hard to separate the two. Vidyard GoVideo and Loom do more or less the same things, so it’ll depend on individual taste. 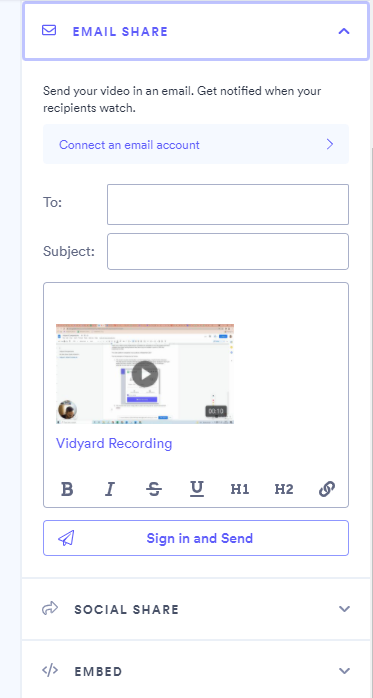 Video editing functionality is pretty much identical - that is, basic.

Vidyard GoVideo is part of the wider Vidyard video platform. If you’re interested in those other features, check out our earlier blog.

Well, Vidyard GoVideo is free by definition… and it has some tasty features as well. 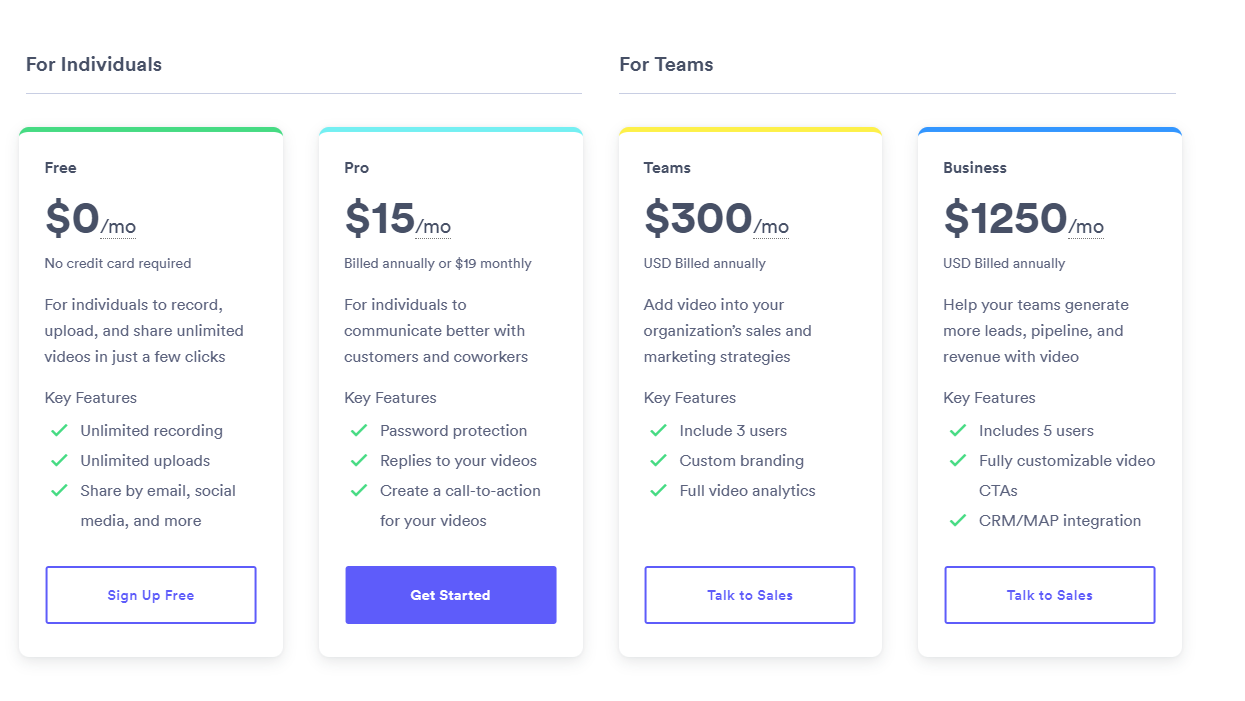 ClickUp is first and foremost a project management tool (think Monday, Basecamp, etc - only better). However, it does include a screen recording tool called Clip which earns ClickUp a place on this list or Loom alternatives. 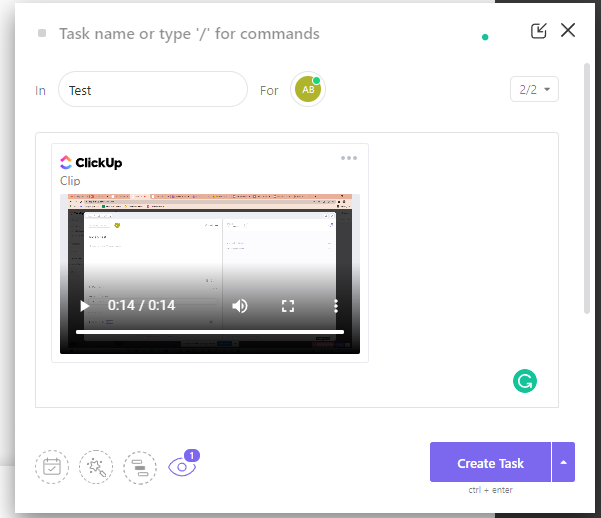 There’s no doubt that Loom is easier to use for a total novice than Clip. Loom launches its recorder from a browser extension. With Clip, you have to create a recording in the context of a task. That extra complexity is just inevitable for a tool that has way more functionality and that aims to fit recording natively into a whole load of other team and project management workflows.

If you just want to film yourself and send that over social or email - Loom’s great (although it’s not as intuitive to use as Sendspark, in our opinion). But if you want to use it alongside chat, to make annotations, to attach to tasks, etc, you’ll have to use other software or integrate Loom yourself.

Clip lets you share links to your videos in the ClickUp workspace, or download them to send onwards. It is not geared towards video messaging in the same way as Loom (that’s Loom’s primary use case).

Like Sendspark, ClickUp Clip does not position itself as a video editing tool - and so it doesn’t include any functionality in this respect.

Loom’s minimal capabilities (trimming the beginning and end; a few in-recording effects) will not be of interest to anyone looking to create really polished recordings, but they do give you a few options that ClickUp Clip doesn’t.

Clip beats Loom hands down for other features. Although the screen recorder lacks some of the functionality Loom offers (no webcam, no video editing), that is outweighed by the many other features that make up the ClickUp offering as a project management and productivity tool.

The use case Clip is optimized for is using video to communicate about collaborative tasks within the ClickUp ecosystem. For that, it’s ideal.

Clip wins here, from our point of view. It all comes down to your use cases.

For quick, customized messages to prospects and customers, Sendspark is the best Loom alternative we’ve looked at.

For making awesome-looking videos with a little bit more time and effort, Veed is a real contender.

In the context of an entire integrated productivity suite, ClickUp’s Clip is a very handy tool. To come close, you’d need to integrate Loom with a lot of other products.

And for building out sales campaigns across a whole team, Bonjoro is a quality Loom alternative as well.

Vidyard GoVideo and Nimbus have their advantages too, as we’ve tried to show.

It all depends on you!