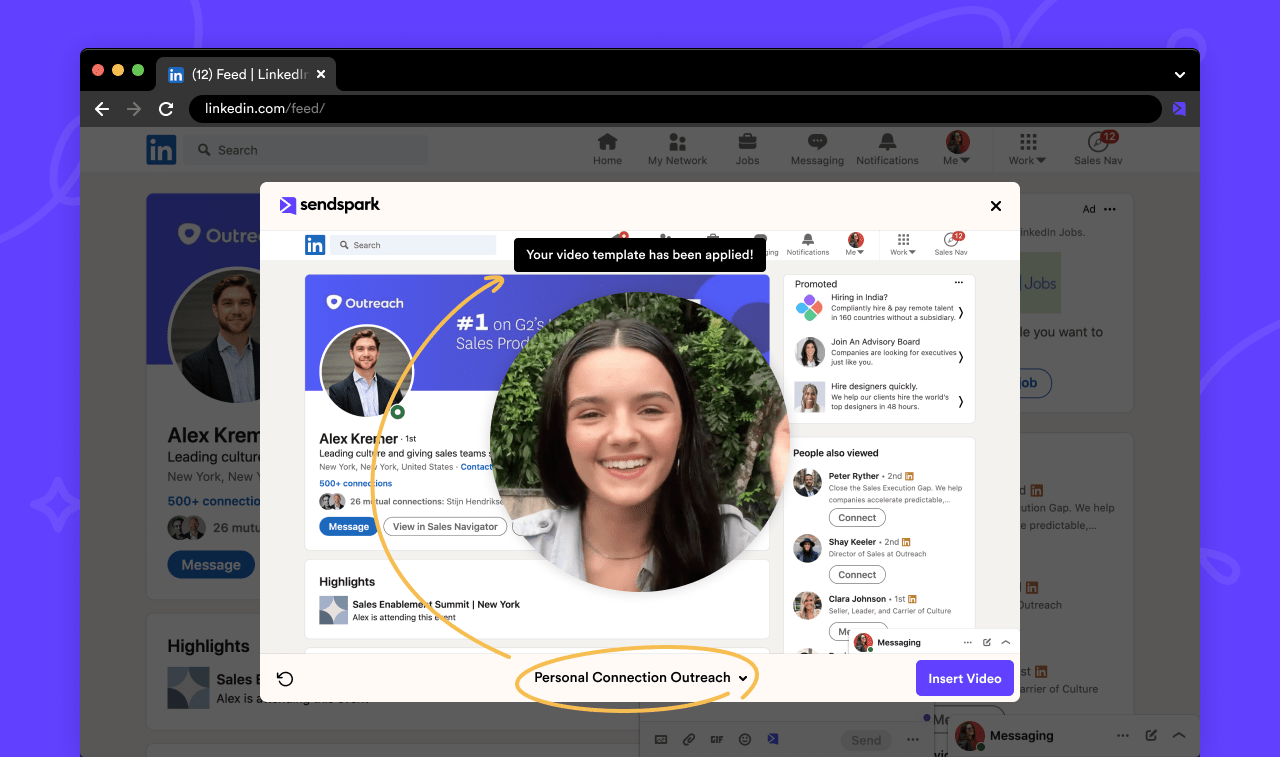 Video in Email Prospecting: 10 moves to Power Up Your Sales Outreach 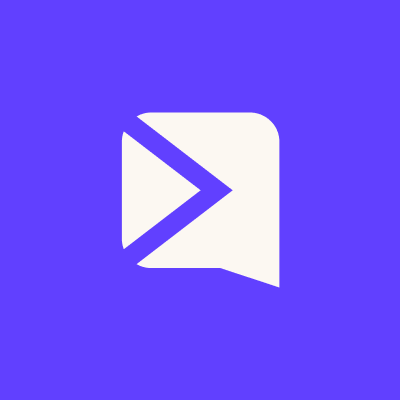 Power up your prospecting with video email! Source: tenor.com

Want to know how to use video in email prospecting? Well, pay attention … we’re going to teach you some new moves!

Outreach is one of the toughest parts of any salesperson’s job. It’s also heavily time-consuming.

So get ready to power up your prospecting! Let’s dive straight in…

Why you need video in your email prospecting

Let’s take a couple of moments to win over the doubters first.

If you’re already converted to video in email then you can skip this section and go straight to the ten tactics, but if you’re not convinced yet let’s allow the numbers to speak for themselves:

If video email prospecting got you just **half** of those results, it would be well worth trying out - right?

But you need to do it well. And that’s what we’re going to show you how to do in the rest of this blog.

(Jump ahead to any of the sections below)

Here are 10 ways to use video prospecting:

Most business decision-makers receive hundreds of emails every day. And just like their phone calls, they screen those messages.

How else would they get anything done?

If you want your prospecting to get noticed, you need to do something different to stand out in that crowded inbox.

And with less than half of businesses using it as part of their email prospecting (43.8% to be precise), video gives you that edge.

Not only is it difficult to resist clicking on an email entitled “I made you this video” (sales teams using video see 16% higher email open rates), but the recording will immediately begin to build a connection with your prospect - familiarizing them with your face and voice.

They’ll appreciate you saving them the time of reading a long pitch email as against watching a short video too.

#2 Follow-ups that cut through the noise

As we’ve seen, most deals need between five and twelve contacts to close.

So scheduled follow-ups are a critical part of any successful prospecting strategy.

But again, how can you make them stand out amid all the noise of a decision-maker’s crowded inbox?

Straight after a meeting, record a quick video summarizing the agreed next steps and including a calendar link (see below) as a Call To Action to get the next call in the diary.

The best follow-up videos are very short - 60 seconds or less - and get straight to the point. As such, it’s best to prepare carefully before recording so that you make a strong impression.

Let’s face it, salespeople tend to be bad at recycling lost prospects. And that’s because it’s often a thankless task that involves a lot of effort for relatively little return. Prospects are pretty unlikely to remember you from an email.

But from a video? That’s a different story.

Putting a face to the name is a great way to increase recognition and the likelihood of a positive response. Record a quick video to remind them of your last interaction, what your service could do for them, and suggest a catch-up call.

As long as you keep it friendly, short, and to the point, your video is highly likely to re-engage that cold lead and get them back into your funnel.

Sometimes, your sales team will need to target multiple contacts at the same business. This is particularly true with larger companies, where it’s often necessary to follow an Account-Based Marketing (ABM) strategy to make inroads.

While sometimes you will want to send personalized communications to individual decision-makers, it’s frequently possible to save a lot of time by recording and sending out account-wide videos, tailored to the organization rather than the individuals.

This way, you can keep all stakeholders involved and up-to-date in a consistent way - without generating pages and pages of text that nobody wants to read.

It’s always good sales practice to sign prospects up to receive your newsletter.

Then, even if they’re a “no for now”, you can keep in touch with them. Your newsletter allows you to announce new features, new use cases, introduce special offers and highlight case studies.

That is, it’s an essential tool for re-engaging friendly prospects who were not in a buying place when you spoke to them.

But most people receive so many newsletters - most of which don’t provide value or novelty - that it’s very easy for one to fade into the inbox background.

So why not send out a video newsletter? 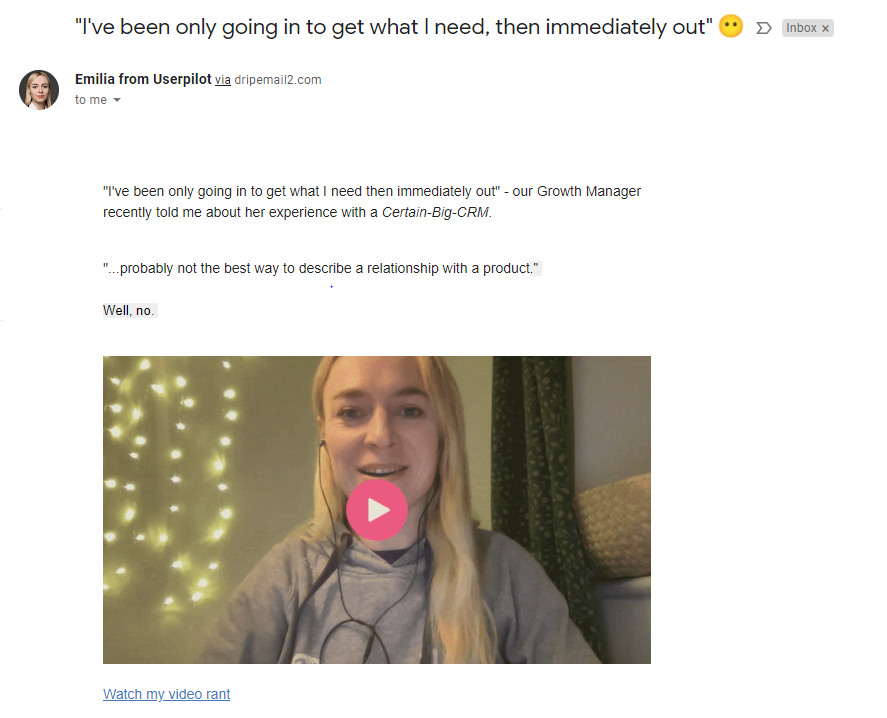 This is something our friends at Userpilot do, with Emilia complementing her weekly newsletter with a regular video rant!

By adding an animated GIF thumbnail preview of the video (which is hosted on its landing page), Emilia gets around the problem of most email clients not supporting inline video playback.

The movement of the GIF is eye-catching and allows you to put across your personality.

So, when you’re designing your nurture campaigns, make sure you put some videos in there to change the pace and make your newsletters leap out of the inbox!

Sendspark is easy to use with most of the major automation platforms (see these help documents for details), making it the ideal tool to give your drip campaigns a boost.

#6 Make your team more efficient with demos, FAQs, and more

Sales reps spend a staggering 21% of their time writing emails.

Of course, much of this can be taken care of with automated email messages, but buyers are very sensitive to generic content - especially in B2B settings where personal rapport is key to making progress.

You can save a lot of sales reps’ time by creating video templates that cover these common topics. Sendspark has a feature for creating template videos of precisely this type. 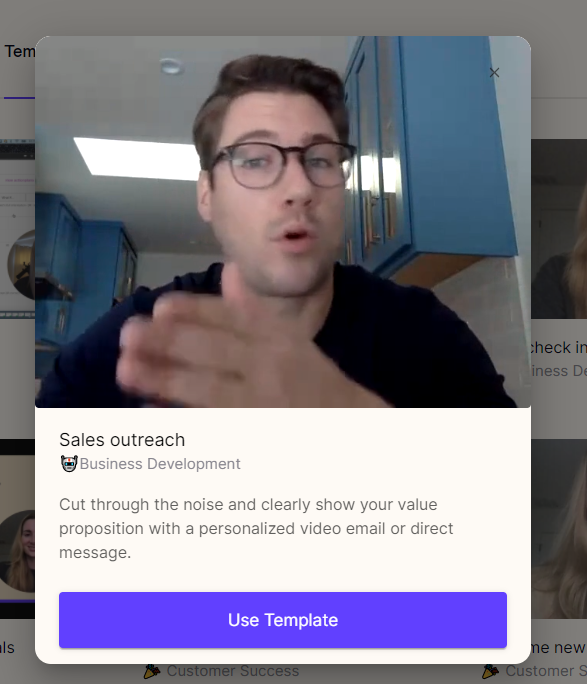 A short video is quicker and more convenient than a big chunk of text. Not only that, research has shown that video viewers recall far more of what they’ve seen than of text they’ve read.

And it’s not just these use cases. Why not record and send out your entire pitch?

Deliver it once to camera and package it up as a Video Sales Letter.

Not only will it save your team hours delivering it over and over again, but it will save you and prospects the hassle of trying to arrange a mutually convenient time for a demo call.

#7 Book meetings when it suits your prospects

That brings us on to another sales bugbear.

Reps spend around 12% of their time scheduling calls, according to the HubSpot research we quoted in the last section - playing phone tag, chasing up email responses, or trying to rebook meetings that have been missed.

That last point is particularly problematic. No-show rates for sales calls can be as high as 40%, which can mean huge amounts of time wasted preparing for meetings that don’t happen.

Calendar services like Calendly have had a big impact on getting these meetings booked more efficiently in the first place, but what about making sure the participants turn up? 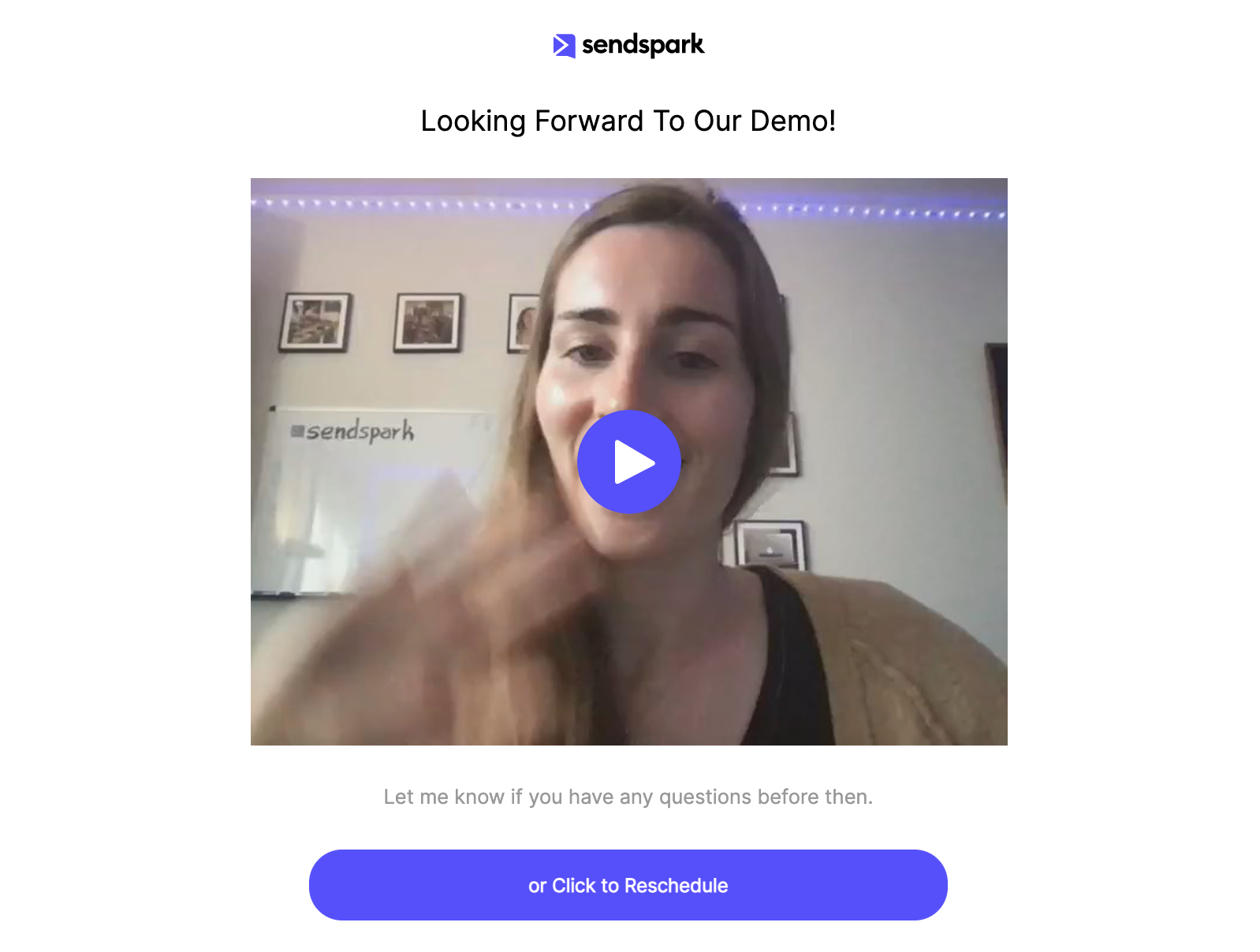 This is where a quick personalized video message with a reminder and the option to rebook can make all the difference.

We’ve found that the video message above increases attendance rates by around 30% and virtually eliminates outright ghosting.

A personal video goes a long way to reminding prospects that there’s a real person at the other end of that call, who has put time and effort into it.

Finally, if you’re not a fan of Calendly, check out some of these alternative calendar sharing tools!

It’s been shown that sales reps who get back to a prospect within an hour have a seven-times better success rate in generating meaningful conversations.

Well, video can help you out here too.

If you record your video messages using Sendspark, you’ll be sent an email notification when it’s been viewed. 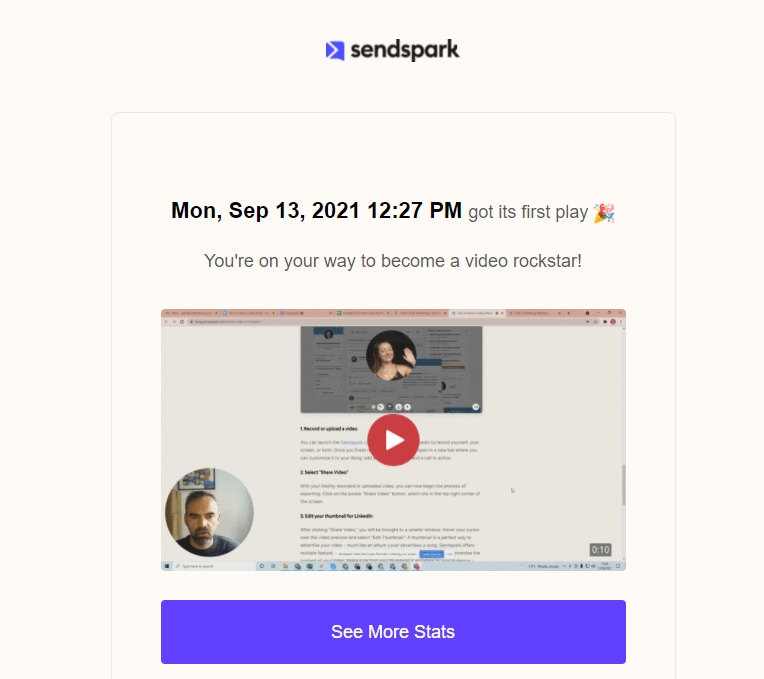 Sendspark also sends out emails when the Call To Action on your landing page is clicked, as well as compiling all these stats in a handy dashboard.

Many organizations’ email setups block read receipts from being requested, so this is a big advantage video messages have over standard email.

With these instantaneous notifications, your team is in a position to jump on prospects with a follow-up to continue the conversation when you’re front-of-mind.

How many times have you said that it’s so much easier to sort out a problem in person than it is over email?

And how many times have you ended up in hot water because email is so prone to misinterpretation?

As we’ve already mentioned, words are only the tip of the communication iceberg.

A huge part is non-verbal, based on body language, facial expressions, gestures, and tone of voice. Email loses all of that. The phone is a bit better, but video provides the lot.

Not only that, video enables you to show as well as tell.

So if a trial user is struggling to use one of your products’ features, record a quick screen share video talking them through it - and showing them exactly what they need to do at the same time.

You’ll be amazed at how quickly problems that drag on for weeks can be untangled with a short video message.

We’ve already discussed how to use video in email prospecting to save time with pre-recorded pitches and demos.

That promises big-time savings, but what about the other check-ins and meetings that regularly form part of the sales cycle?

It’s all very well sending out all these messages to prospects, but sooner or later you need them to get back to you!

This is where Sendspark’s Request Video feature is invaluable. 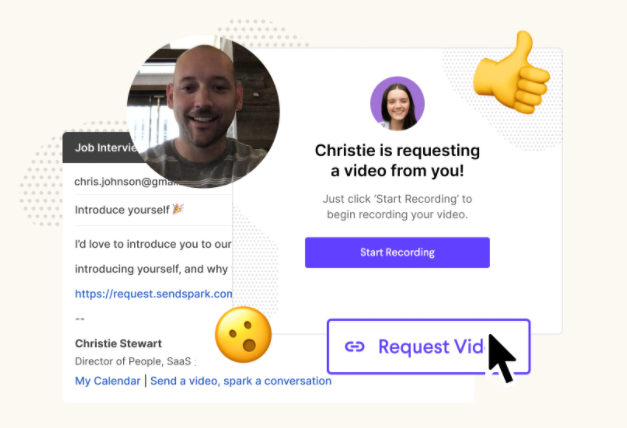 With just one click you can include a link in your messages requesting a video response.

When a prospect clicks on it, they’ll be taken straight to the Sendspark recorder - without having to install any software or even a browser extension.

It’s super easy to use, so even the most tech-averse prospect will be able to use it. And when they’ve recorded their reply, you’ll be notified immediately and able to watch it back from your Sendspark account.

This feature makes it possible to have asynchronous video conversations - removing the need to book face-to-face sessions, but maintaining the personal touch that only video can supply.

If you want to be a prospecting master in 2022, you’re going to need video in your toolkit.

We haven’t even talked about video prospecting using LinkedIn. Check out this blog for more on how you can leverage your network to reach some of the people who are resistant to email approaches.

And if you’re concerned about your emails going to junk mail - don’t panic! We’ve got a complete guide on the best practices to make sure your messages get through to the inbox.

So - if you haven’t already - sign up for Sendspark free and start prospecting the new way today!

Sendspark is the easiest way to record and request videos. Liven up your communication with video today!