Even with the least sexy product name out there, Open Broadcaster Software, or OBS, is an outstanding product. And it’s not just for gamers who live stream!

OBS is also a solid video recording app. Many YouTubers swear by it. But is it right for you?

Today, we’re going to inspect OBS’ strengths and weaknesses. We'll then compare it to 6 top OBS alternatives for video recording

How Good is OBS Studio?

In case you didn't know, OBS Studio is an open-source screen capture and video platform that can not only record but also broadcast live.

What is OBS great for?

OBS Studio is particularly popular in the gaming community because it lets you compose video from multiple sources, mix your audio, and customize hotkeys to control the recorder in full-screen mode. You can then stream live over Twitch (or another streaming platform) or upload to video sharing sites.

OBS Studio runs on Windows, Mac, and Linux, and because it's Open Source, it's free, it doesn't add watermarks, and there's no length limit on recordings.

For a free tool, it has a crazy number of customization options

So why would anyone not want to use OBS Studio? 🤨

Being open-source comes with some big downsides:

Plus, as the app home page below shows, OBS Studio is pretty intimidating for beginners.

Before you can record anything, you need to configure input sources individually - full computer screen, browser, webcam, audio input, etc. And the user interface is not particularly welcoming:

As downloadable software, OBS Studio works offline but that also means it can't be used on a lot of devices, including Chromebooks.

And unless you're live streaming, the only way to share video files is to download them and send them in another app.

Who is OBS for?

If that's not you: read on!

Sendspark is a screen recording and video messaging tool that's been designed by marketers for sales, marketing, and customer success teams. It's focused on making great-looking videos quickly, then incorporating them into customer communication workflows.

What is Sendspark great at?

Sendspark has thought of everything when it comes to using video in messaging.

If you're looking to leverage the power of video in your email or social media communications (and check out these impressive stats for the reasons why you should be!), then sign up for a free Sendspark account today.

If you use video as a messaging tool - and why wouldn't you? 😊 - then Sendspark is ideal for you. It's simple and quick to use, and free to get started.

Why Sendspark is a great OBS alternative

If you want to live stream or game, choose OBS over Sendspark. But if you want to take advantage of the power of asynchronous video messaging - particularly in sales, marketing, and customer success settings - then Sendspark has been designed precisely for your needs. 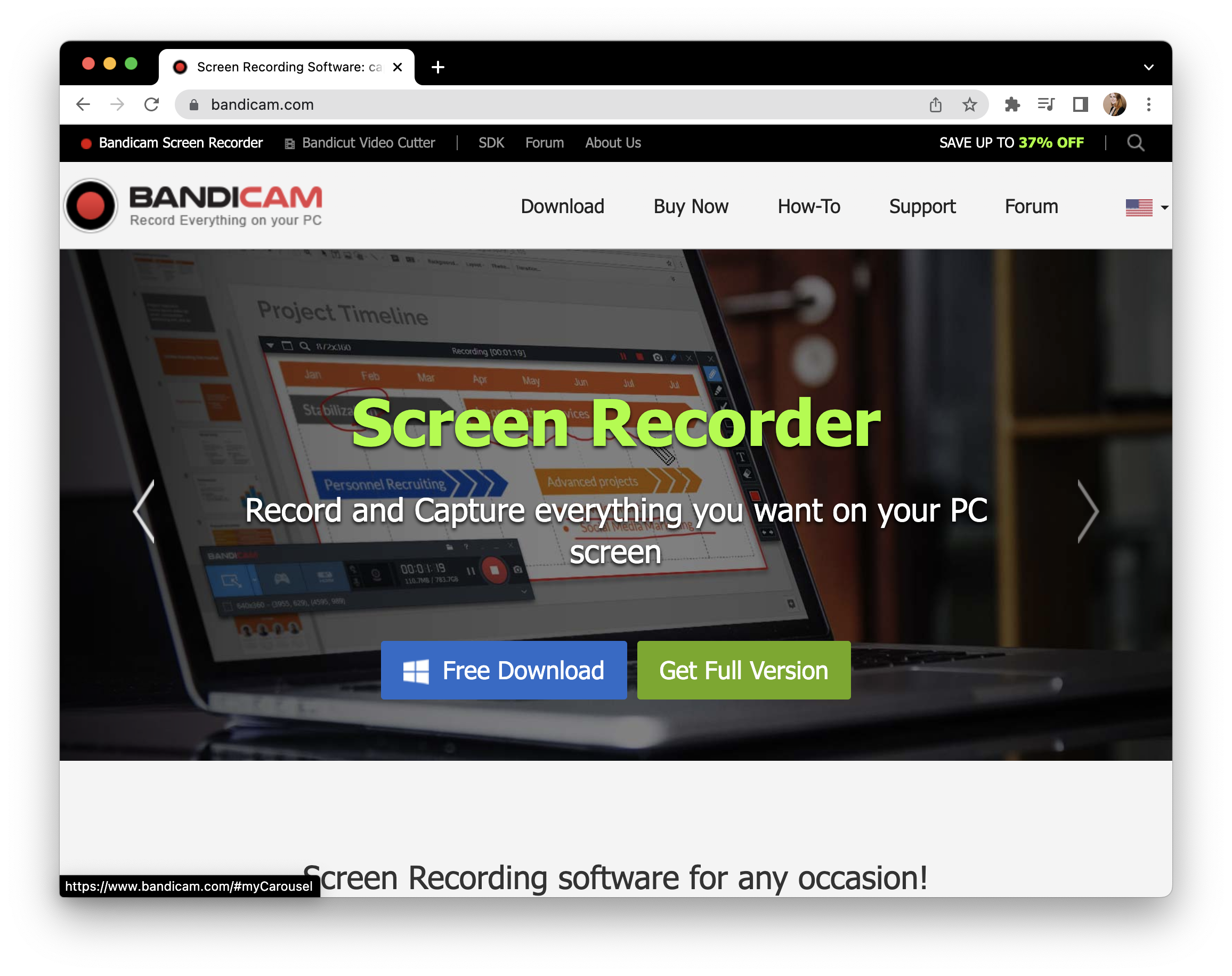 Bandicam Screen Recorder, Bandicam for short, is a lightweight screen recorder that's just as popular as OBS. It focuses on high-quality video capture as a feature.

What is Bandicam great at?

Gamers love Bandicam because it records video at a whopping 480 FPS rate (although you'll need a pretty powerful machine to make the most of that).

And while it has many of the same features as OBS, it's a lot easier to get to grips with. It has three main recording modes - screen, gaming, and device - and those presets are a big help in getting set up.

It supports a webcam overlay in screen recordings with chroma key effects:

So, if you're a novice wanting to record your gaming sessions, Bandicam is definitely an OBS alternative you should consider.

Bandicam has a few other cool features:

Why Bandicam is a good OBS alternative

Bandicam is a direct competitor to OBS in the gaming video space. If that's what you're about, and quality, ease of use, and support are your priorities (and you use a Windows PC machine!) then Bandicam is certainly a great OBS alternative. 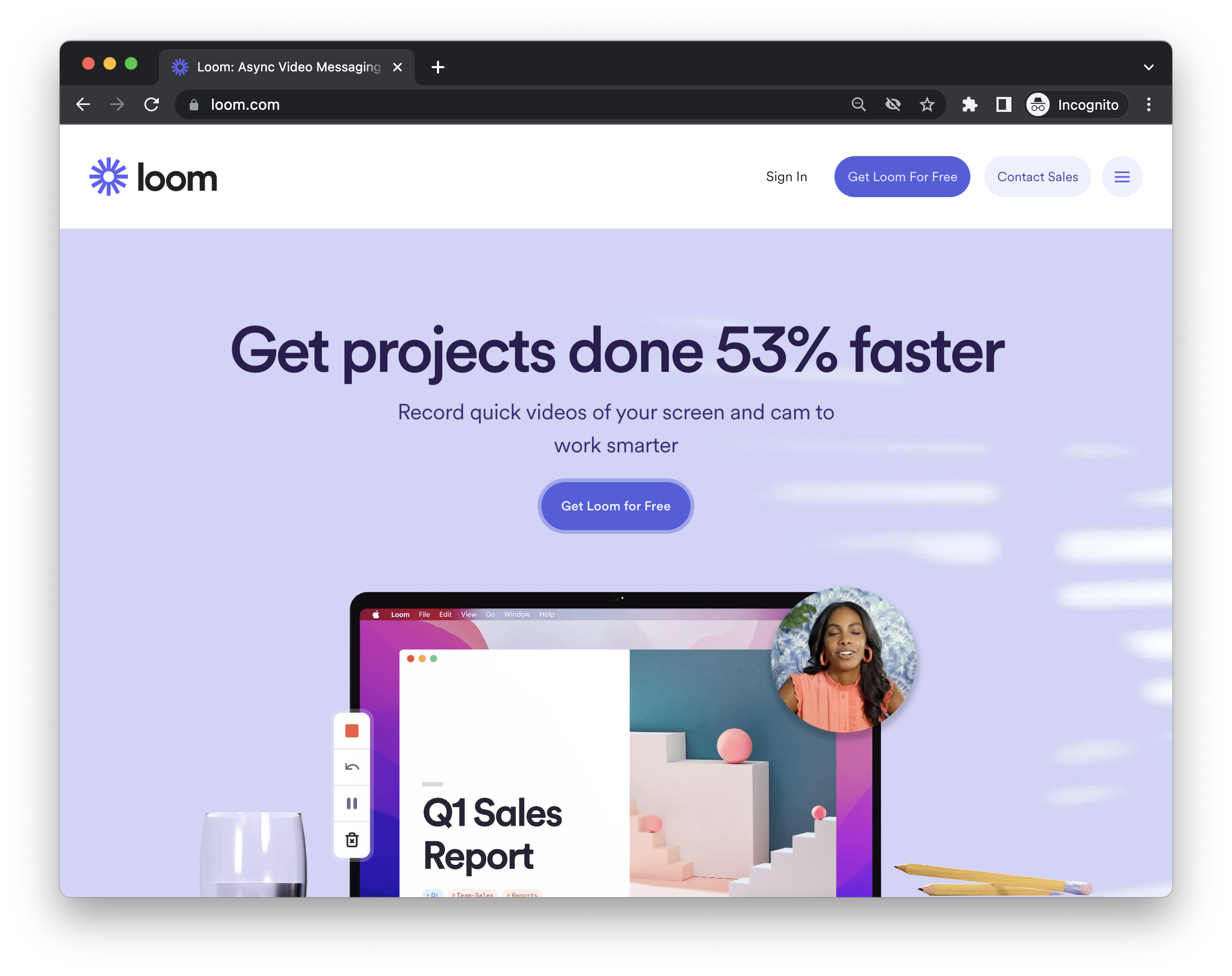 Loom is a browser-based screen and webcam recording, editing, and messaging tool. When you sign up, you get a 15-day free trial of their Business package, which reverts to the free-forever version if you don't upgrade in that time.

What is Loom great at?

Loom is very easy to use for creating videos fast, giving them a little polish, and sharing them.

It has very similar sharing options to Sendspark at a basic level. But when you dig in, Loom is not really optimized for sales and marketing communications in the same way:

Nevertheless, Loom is a great all-around screen recorder. From just $8 a month it offers:

There is a free version, but users are restricted to 25 videos a month of no more than 5 minutes.

Why Loom is a good OBS alternative

Loom as a good OBS alternative really depends on your use case. If you want to create and share videos quickly and spontaneously, it's much easier to use. The flip side of that ease is that there are not many features to learn.

There are better editing tools (eg Screencast-O-Matic), better communication tools (eg Sendspark), and tools that give you far more flexibility (eg OBS), but Loom remains a favorite because it does those things it does so well. (See more on Loom alternatives)

Screencast-O-Matic is a downloadable screen recorder and editing tool, which is very easy to use and ideal for making videos quickly. While the free version can't compete with what Sendspark and Loom have to offer, the premium version is cheap and has some great features.

What is Screencast-O-Matic great at?

The best feature about Screencast-O-Matic is the editing capabilities it offers at a very low price.

Like Sendspark and Loom, Screencast-O-Matic offers analytics from videos embedded and linked videos hosted on its cloud platform.

It's a great tool for educators and has been widely used for creating online course materials and lectures.

Why Screencast-O-Matic is a good OBS alternative

Of the tools on this list, Screencast-O-Matic competes most directly with Loom rather than OBS.

It's a solid video recording tool that is easy to use but feels a bit old-fashioned compared to Loom and Sendspark - it is also much slower to process downloads than either of these options. 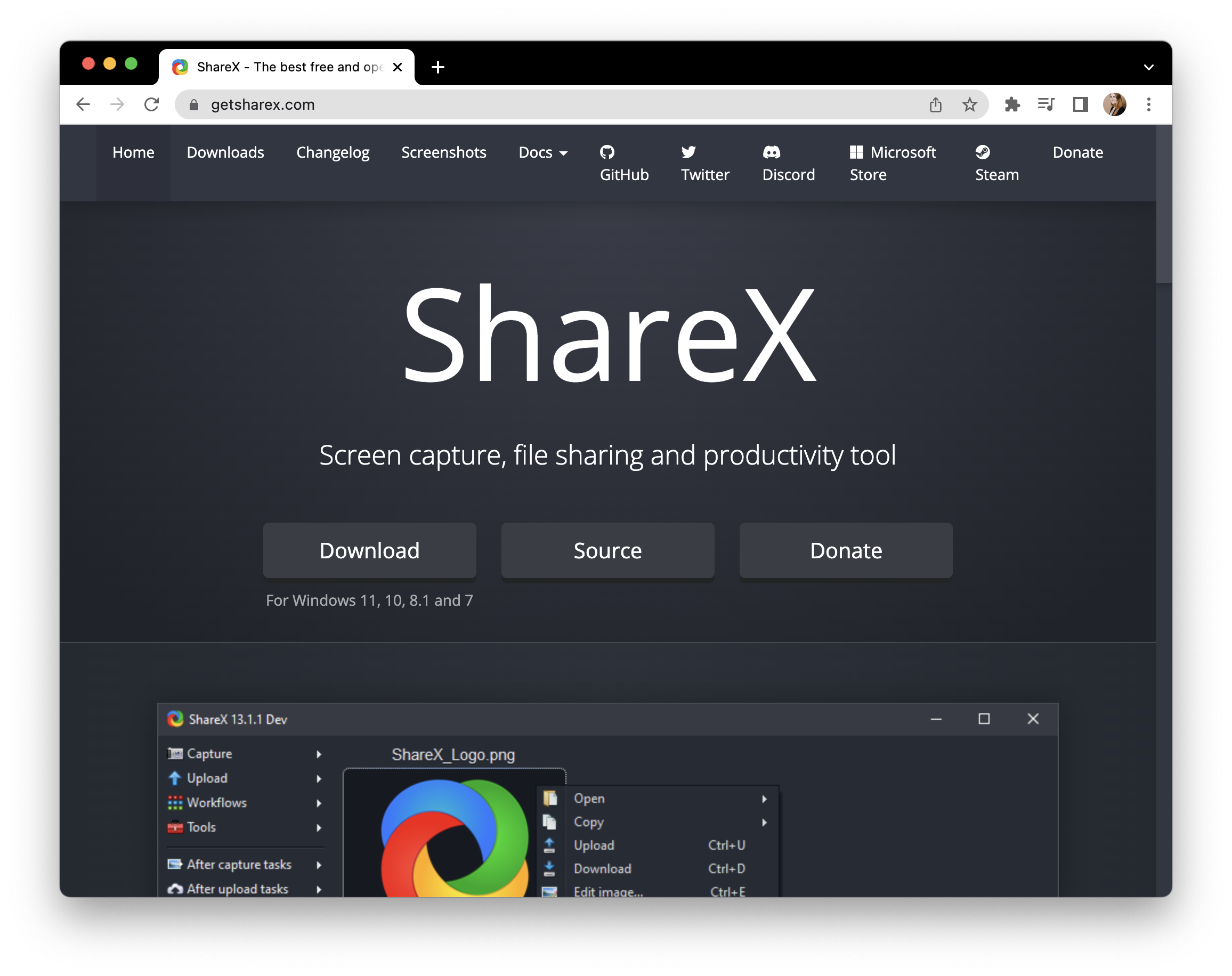 ShareX is a free, open-source screen capture and recording tool that gives you loads of customization options - just like OBS - but with a few notable differences.

What is ShareX great at?

ShareX is great at capturing screenshots and recordings:

However, ShareX doesn't support webcam recording at all. So if you want to create videos with a personal touch for communication or training purposes, you will want to look elsewhere.

What ShareX is great at is...sharing. It has preset options for sharing or uploading your captured files to more than 80 different destinations.

Why ShareX is a good OBS alternative

ShareX is not an easy tool to make the most of. It's tricky to use the advanced features and is primarily aimed at developers. Indeed, as an open-source product, it's likely to appeal to people who want to get under the hood and customize.

But as it lacks webcam capture, ShareX is probably not your best bet as a video recorder. 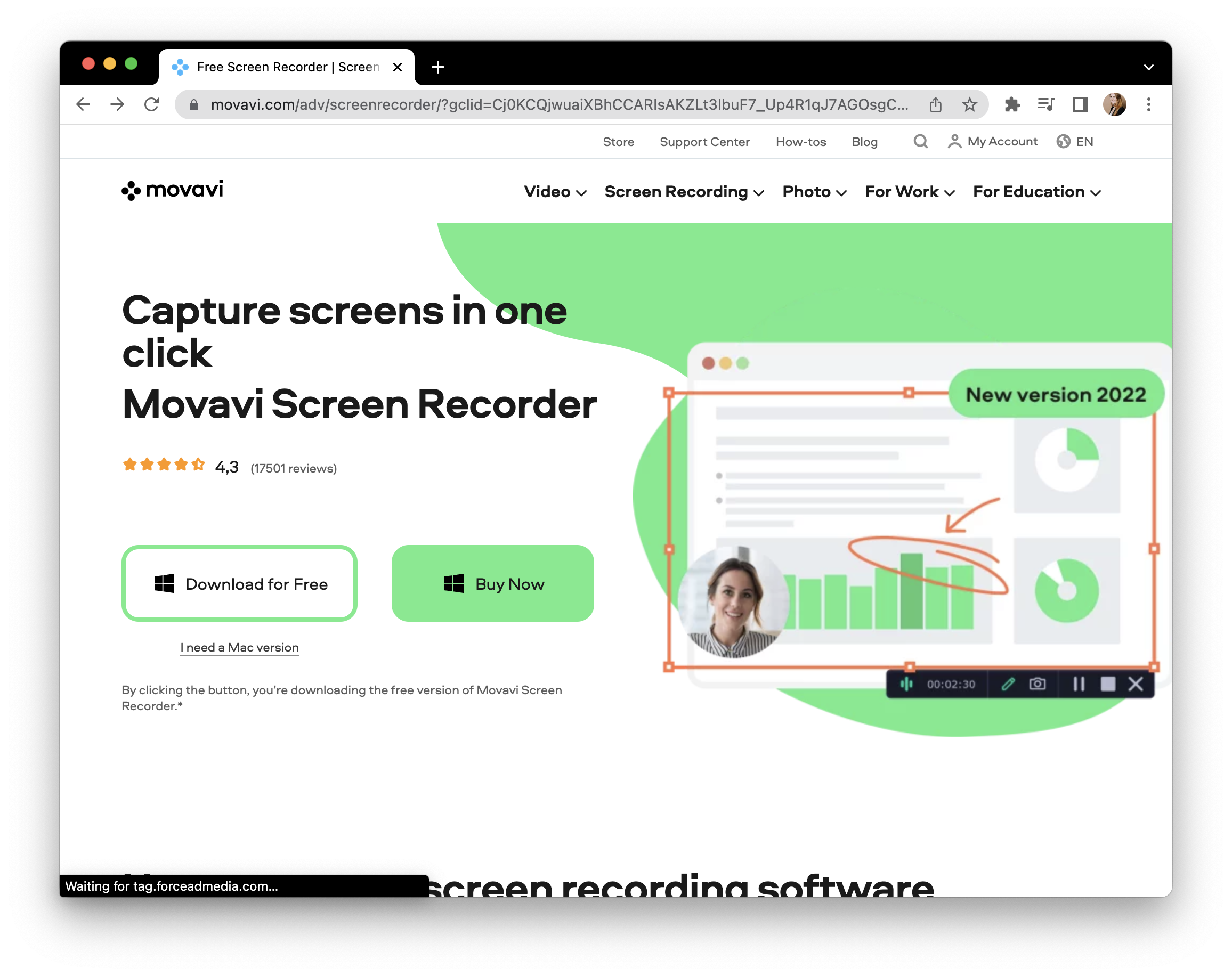 Movavi Screen Recorder is a piece of screen recording software with a gentle learning curve. You can record some or all of your screen, manually or automatically (by pre-selecting a recording time). If you want to edit your recording afterwards, Movavi gives you all the features you need: cutting, trimming, effect transitions, and more.

For a deeper feature set, you can use the Movavi Video Suite. It includes an editor and converter, as well as some cool extras.

What is Movavi great at?

Movavi Screen Recorder is part of a larger suite of recording and editing tools. You can use these to create beautiful videos easily. It combines powerful editing tools with robust recording features; both are simple to use.

You're not going to get anything crazy with Movavi Screen Recorder, but that might be a good thing. If you want to record and edit videos quickly, then save them in different formats for multiple platforms, you'll like this app.

Why Movavi is a great OBS alternative

All in all, Movavi is better for social media publishers - YouTubers, Facebook Video uploaders - than it is for business or gaming. That being said, you can still use it for gameplay recording. The one thing it won't help you create is streaming video.

Screen recording can be used for an almost endless variety of purposes, so it's important to have your use cases in mind - and know which tool fits the bill - before you decide.

We hope we've made that a little easier for you with this blog!